Me, Nandita and the Paparazzi!

Ok. Despite the lofty title, this is what happened.

Nandita Das was at IFFK, Thiruvananthapuram to promote Firaaq. After an open forum where she sounded very sensible, she fell off the stage! I mean literally. 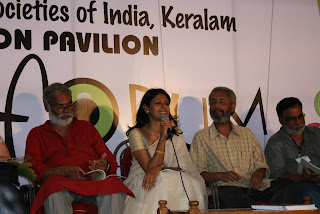 And I was there with a first hand account of everything she said before the Paparazzi surrounded us! Darn it. No bloody reporter approached me to get that scoop. Losers! Hope they atleast got me covered in the front-page photos.

As for Firaaq, I think its a good debut for Nandita. It'll put most Gujarati's to shame. Without the bluster and crap you would expect from these kind of movies. But as cinema, I wasn't too impressed. 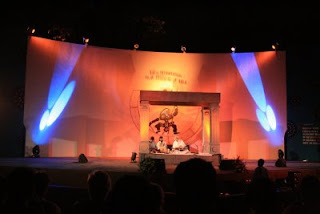 We went to 9 movies, a documentary and a Shiv Kumar Sharma concert. While Chevolution, Aurora Boreal, Postcards from Leningrad, Firaaq, Hafez and Laila's Birthday made up the rear guard, here's my top four picks.

Ulzhan: This movie made my trip. Ulzhan as you would expect is an atrociously beautiful girl. From remote Kazakhstan who teaches French to cute little kids! She accompanies a man from France who travels all the way east, to the China-Kazakh border, to the place where ancient Shamen went to die.

Music Box: The kind of movie only Iran can make. A little boy meets up with Obedient Agent No.2. OA2 ofcourse escorts people on to their next journey, in the afterlife! And their dialogues throw up some seminal questions on life, death and love.

Listening to the Silence: With a title like this, how can you bet against it? A Russian movie where everyone turns out to be good and decent! And the girls. Alya, Yulia ... sigh!

The Yellow House: A very moving tale from Algeria. Reminded me of 'A Painted House', which I should now add to the reread queue. Simple people. Hard but simple life. Worth living, and dying.

Now I have to decide how the above four affect my all time list.
Posted by Balaji Chitra Ganesan at 9:02 PM